The OG.Seed Dota 2 roster has announced its disbandment. This announcement comes nearly one month after the lineup parted ways with the organization. The team had initially expressed a desire to stick together, but now has announced that its players will go their separate ways.

1/2 Some sad news. We have decided to part ways with OG.Seed roster, we were just planning to come from our break and get back into dota, but some of our players got offers, we had a talk as team and decided its better to part ways.

Last month OG had given a 30-day notice to their academy roster after Valve’s rules for the TI10 qualification prohibited two teams under the same organization to compete in the qualifiers. The OG.Seed lineup announced that it will disband two days shy of this thirty day period.

OG.Seed came into existence in November 2019. The team had a large following and its fans vehemently supported the roster. However, in-game success was hard to come by and OG.Seed could not replicate its parent team’s success.

With all that stuff being said. I will take a short break from competive dota until i find something that i feel good about again. I have always found trying to be analytic/caster interesting and might try to look to do that in the future if the opportunity comes.

According to Peksu, some players on the Dota 2 roster have received offers from other teams. After internal team discussions, the players decided to go their separate ways.

The coronavirus pandemic meant that the team could not practice during the past few months. With Zakari “Zfreek” Freedman in North America without any means to travel to Europe, OG.Seed had to play in online competitions with a ping disadvantage.

OG.Seed’s Dota 2 roster is as follows:

Former NiP player, Akbar ‘SoNNeikO’ Butaev has parted ways with the team. After rising to fame with Na’Vi, SoNNeikO established his Dota 2 team, the Chicken Fighters. The team had some surprisingly good results on LAN defeated tier one Dota 2 teams with alarming regularity.

NiP signed the Chicken Fighters roster earlier this year, hoping that the team would continue with its success.

SoNNeikO has revealed that he is no longer a member of the NiP roster.

I am out from nip ! Thanks to my teammates for good days 🙂

The announcement drew sharp reactions from community members who could not hide their disbelief.

The player has not announced where he will play next. But for any team looking for a roster replacement, ‘SoNNeikO’ will be the perfect addition to their roster.

Stay tuned to Esports-betting-tips for the latest esports news and updates.

With the conclusion of the cs_summit 6 Online Europe tournament, BIG has emerged as a top contender in Europe. BIG defeated Team Vitality 3-2 in the Grand Finals after an astounding performance by 24-year-old Turkish player, İsmailcan “XANTARES” Dörtkardeş.

The Grand Finals saw Team Vitality start with a 1-0 advantage. They reached the Grand Finals with a 1-0 map advantage. However, BIG is no stranger to winning tournaments despite a one-map disadvantage. After securing the DreamHack Masters Spring 2020: Online European tournament, BIG’s comeback in the cs_summit 6 should not be a surprise to CS:GO fans.

Crucial to BIG’s performance was the team’s synergy and the players’ coordination with each other. Unlike Team Vitality, which boasts Mathieu “ZywOo” Herbaut as the superstar, BIG has a relatively even distribution of frags across the board. 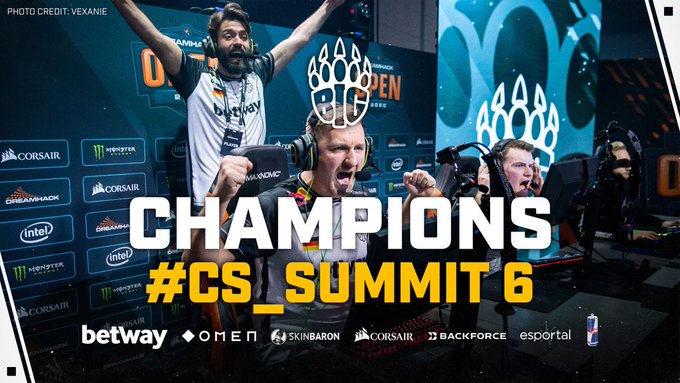 BIG has defeated both the top French teams in the past months to win the DreamHack Masters Spring and the cs_summit 6 online tournaments. Image Credit: BIG’s Twitter Account.

We did it. I’m speecheless❤️ Number 1 team in the world #gobig

BIG fans will remember July 2020 as a momentous occasion for the organization. BIG was a Tier 3 team a few months ago, but the team climbed to the top spot after its cs_summit 6 online Europe victory. The team’s playstyle relies on every member of the team performing adequately and their coordination and synergy ensure the right framework for success.

This particular BIG lineup has been together for more than six months. The team did not have any decent results to show in 2019 and this resulted in a roster change at the start of the new year. BIG added Florian “syrsoN” Rische and Nils “k1to” Gruhne to their squad. This roster change has proved effective as the team has climbed nearly 45 places since January. 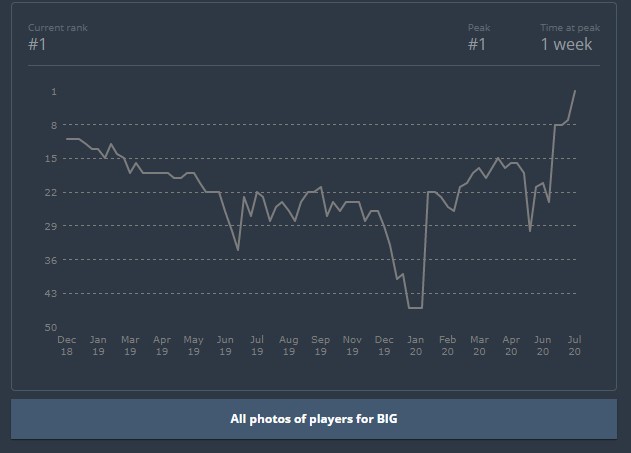 BIG holds a slender lead over their cs_summit Grand Finals opponents in the rankings. The three-point lead will hold for a few more weeks as the players go into a self-imposed players break. Tier 1 Global Offensive action resumes in August with the return of the ESL One Cologne 2020. ESL is planning to host the marquee event online as social distancing norms and travel restrictions will make it difficult to organize a LAN event.

What Is A Regional Major Ranking Event?

The Regional Major Ranking system is a points-based qualification system that Valve will use to determine the final list of invites to the ESL one Rio Major in November. Valve had to postpone the event to November due to the coronavirus pandemic and the resulting global travel restrictions.

Here are the top ten CS:GO teams after the latest HLTV rankings: